The following story is brought to you courtesy of PJ Media. Click the link to visit their page and see more stories.

We went four years without glossy magazine covers trying to puff up the image of the sitting president. And no magazine ever featured our former first lady, an actual fashion model, either. The Bidens have now graced several, but this may be the most absurd. GQ Hype in the U.K. gave President Biden a fashion spread that is just….gag-worthy. The cover reads “Joe Biden, Swagger-in-Chief!” with a picture of the president LARPing Garth Brooks sitting on the tailgate of a vintage pick-up truck, complete with a few bottles of Budweiser at his side: 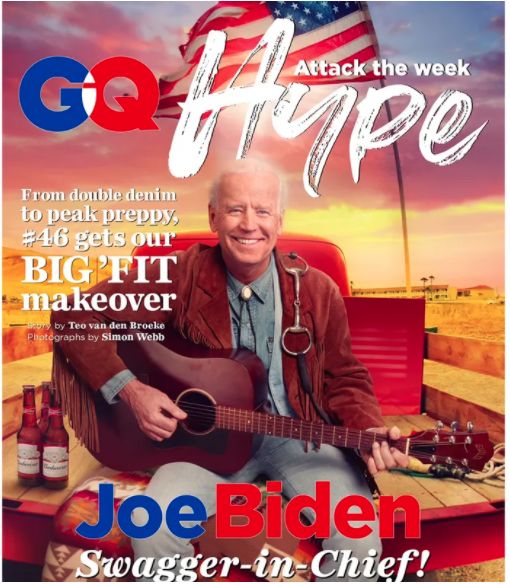 Does Biden even play guitar? This magazine is trying to turn a septuagenarian from Delaware with cognitive issues into a heartthrob. Really? Swagger?

We have certainly seen him be aggressive. Biden challenged a union worker to a fistfight and swore at him on the campaign trail. He also said he’d like to take President Trump behind the gym. Biden also snaps at reporters when they ask him about his son Hunter’s shady business dealings. These situations are just instances where Biden is a jerk, and they often happen when he is not confident about answering the question posed to him. Most people with actual an actual swagger are also not gaffe machines.

The rest of the images are just as kooky. I am not sure why the stylists envision Biden in Western wear repeatedly. Bolo ties, big belt buckles, and fringe are not what comes to mind when I think of an East Coast corruptocrat who has been running for president for 50 years and finally won because it couldn’t be Bernie Sanders. And then someone actually wrote this:

Like some bronco-riding, lasso-swinging love child of Ennis Del Mar and Billy The Kid, Biden knows his way around a tasselled suede jacket and ten-gallon hat better than most of his presidential predecessors, Dubya notwithstanding. Oh, and he’s not one to be thrown off by an overinflated orange rodeo clown, either.

In one of the photoshops, they dress him like he is 24 instead of nearly 80. There is a shot of him leaning up against the Resolute Desk in an outfit that reminds me of college kids peacocking at CPAC a few years ago. Pastel dress shirts with the sleeves rolled up, Madras shorts, and sockless loafers. Hysterically, it looks like his shorts have an elastic waist, which reminds me of old lady pants.

They dress him up like James Dean and lean him up against a pink Cadillac in another shot. Bright white Converse sneakers with the cuffs of his jeans rolled up to complete that look. Then he is posed next to the podium in the White House press conference room in an oddly fitted business suit, trying to look casual and tough but ends up looking more like Jeff Dunham’s puppet Walter than anything else.

Of course, no puff piece on Joe Biden’s swagger would be complete without the obligatory nod to his ever-present aviator glasses. In fact, they actually wrote an entire report about his choice of eyewear. A whole separate article. GQ’s award-winning style and grooming director Teo van den Broeke may need a drool cup. He has written at least four pieces slobbering over how Joe Biden dresses and is just so sophisticated and stylish. And it matters that Joe Biden wore Ralph Lauren to the inauguration, y’all. Really.

To mask or not to mask: Biden administration takes all sides on mask mandate

Democrats Panic as Latinos and Asian Voters Leave The Party

The Stakes For Donald Trump Versus Social Media

‘Horrendous fraud’: Americans ‘elected a shell of a president’

Fauci and Pelosi both believe that calling a virus a ‘pandemic’...

The President Who Wasn’t There